Ask for Booking Form
I first met Andrew in 2011 at Pushing Hands UK  and have worked with him each year since. Working with him has brought me valuable insights into my own understanding and practice of pushing hands and it is a joy to work with someone who is able to embody the philosophy of ‘Not by Force’ in push hands as well as demonstrate in practical terms exactly what this means. I was fortunate enough to meet his teacher Tao Ping-siang in Taiwan in 1990, just 3 years after studying with Dr. Chi, the great master of neutralising energy. Tao’s lightness of touch reminded me of Dr Chi. We are most fortunate to have Andrew come over from the States to visit us once or sometimes twice a year      Angus Clark
“I have pursued the Grail of pushing hands without force for forty years. The expession, "not by force" is from Tao Ping-siang, classmate of William Chen and Ben Lo, student of Cheng Man-ching. He realised that ideal better than any one else I encountered. Many people talk about being soft and yeilding. Few can answer the question "How?". I understand Tao's method well enough to suggest how he did it, and to do a little of it myself.” Andrew Heckert
Watch video of Andrew pushing with Tao ...
Event Review by Aidan Spencer
Andrew Heckert's Exeter seminar offered a rare opportunity to explore pushing hands with a western teacher who has developed real and demonstrable internal martial skill, able to remain completely soft even when faced by a committed push. He bases his teaching upon his late teacher Dr Tao Ping-Siang's model of a ball upon which an incoming push can find no purchase but is instead returned to its originator as the ball rolls around. Andrew generously shares knowledge drawn from many years' in-depth and at times grueling study with three of Cheng Man-Ch'ing's senior Chinese students, together with his own humerous slant on the material. T'ai-Chi principles are brought to life through pushing hands practice and form applications, alongside ever constant encouragement to be more relaxed and soft. I have found Andrew's teaching an invaluable addition to my Chinese internal arts toolkit; it has helped me better appreciate Cheng Man-Ch'ing's refrain to forsake the near for the far and "invest in loss" through keeping in check the ever present temptation for cheap pyrrhic victories when pushing hands. Andrew's seminars would be of great interest to anyone who has an abiding interest in functional T'ai-Chi Ch'uan but doesn't actually have the desire or stomach for a real fight! 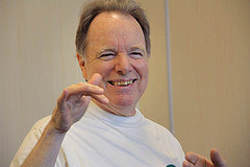 About Andrew:In 1973 I began studying Tai Chi in Philadelphia with MaggieNewman, one of the six senior students of Cheng Man-ching’s school in Manhattan, the Shr-jung. I learned from her for five years.
In 1981 I began study with William Chen in New York City. For the next ten years I commuted to New York to attend classes in his school and take private lessons. In the summers I attended the week long workshops in the Catskills given by his classmate Ben Lo of San Francisco.
In 1991 I became a student of Dr. Ping-sung Tao of Taiwan. I travelled to Manhattan, to Seattle, all over the country and to Germany to attend workshops with him, until his death in 2006.
For the past sixteen years, I have researched the application of the principles of Tai Chi to everyday movement, how to become more comfortable living in this body, and the secret of how it was that Dr. Tao, at the age of 88 and of very slight build, was able to easily defeat people twice his size and half his age in pushing-hands.
Proudly powered by Weebly